On latest SW version(v1.0.2.9) and printer is AnyCubic Photon.with the 50micron Default profile.

I loaded this object:


(A bearing using cogs that I customized off of another, with 0.25mm ‘Tol’)

But it lists it as having 0 volume.
If I placeit at ‘Low printing position’ while laying flat, and generate supports(50% density, 0.5mm tip diameter) I get

It printed just fine, though. But can’t be rotated.
(Trying to find the right tolerances and print settings to make it work)
I’m working on a 40x10mm bearing of the same design, but with 0.35 Tol instead, and that also reads as 0 volume.

Thanks for mentioning this.

Checked the file; it seems it’s a corrupt file. The normal vectors are messed up so the volume calculation is wrong subsequently.

Normally i would say, activate the option to recalculate the normals on import. (import settings).
However i noted this is an Ascii Stl file (again no idea why somebody would export this, no reason for doing these files in plain text). For the ascii importer I forgot to force the recalculation; I’ve added this now so will be there in the next release.

For if you want to to have the Stl, open it (will show up brown), then save as ‘stl, binary’ and re import with force recalculation of normals on.

The file is made by the ‘Customizer’ module on the Thingiverse set, and it uses an OpenSCAD library.
OpenSCAD only exports Ascii .STLs as far as I know. Why this is I have no idea. Probably for easier debugging?

Anyway, this is the first time I’ve seen a borked .STL produced with OpenSCAD, so it was weird.
(I don’t even bother to do a diagnostic on them usually. It’s just a waste of time)

I’ll download the original OpenScad file tonight and exeriment with that to see if it’s a bug in OpenSCAD itself or just the module used on Thingiverse.

It can also be the openscad engine uses a different axis system and the normals are not exported correctly. (i.e. rotated 90 deg.).
I’ve seen this bug in MeshMixer.

Most software overcomes this by forcing a recalculation of the normals on import.
We made this optional to save some time… maybe should put it on to default. Seems there is so much crappy stl’s out there that this is a common issue.

I downloaded the original .SCAD file from 2013, rendered it and exported it as .STL.
Besides a warning about a function that’s going to be deprecated, there was no issues.
And when loading the file into Formware, it indicates 22ml resin.

I guess we can assume that the original files was made in a slightly unfinished renderer, and that Thingiverse is running a bad one, too.
If I read their Thingiverse group correctly, then the Customizer may actually be running 2015 code…

mm interesting! I will check this thingiverse output more carefully then, perhaps . For meshmixer I also hardcoded a correction. When it detects a meshmixer stl I automatically force recalculation of normal vectors…

if you check the .stl file in a notepad you see this…: 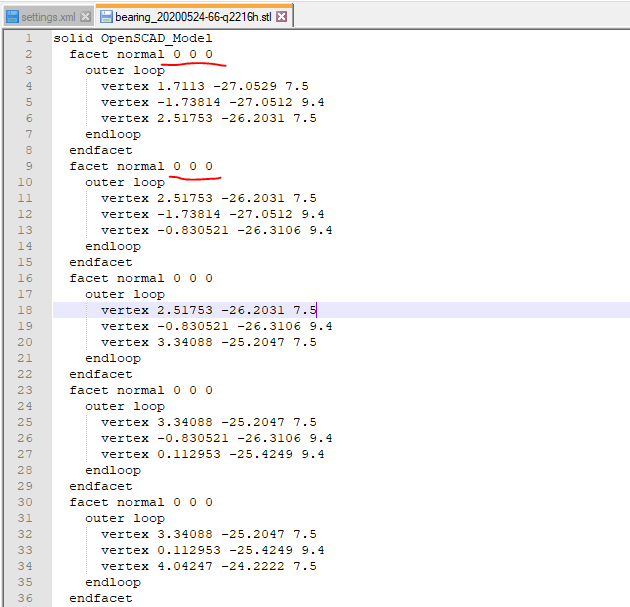 A pity that the Customiser adds the same text at the start of the file as OpenSCAD does.